Yves Gellie (born 1953 in Bordeaux) is a French photographer. After medical studies at the University of Bordeaux, he practiced tropical medecine in Gabon for two years. In 1981, he began his career in photo-journalism with a feature about cocaine production in Colombia, followed by a story about war refugees in Ogaden, Somalia. He then became a specialist of the Middle-East, obtaining a World Press Award for a project on Oman in 1988, and the prize of the Society of Publication Designer's and the Merit Award in 2003 for his work on Saudi Arabia. His work being between photo-journalism and contemporary art, he has developed a style described as an iconographic selection of the reality underlying the day-to-day life and its trivial aspects. 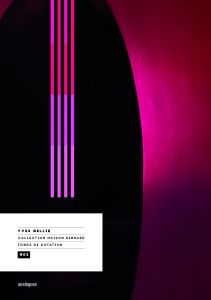 Collection Maison Bernard, Fonds de dotation #03
2020
bilingual edition (English / French)
Analogues - Monographs
The third title in a series of publications dedicated to artists' residencies at Maison Bernard, a masterpiece of organic architecture carried out in the 1970s by Antti Lovag in association with Pierre Bernard. The book documents a site-specific project by photograph Yves Gellie, a work on light and perception.