The paintings and sculptures of Greek American Gerasimos Floratos (born 1986 in New York, where he lives and works) play with the idea of site specificity and the notion of what it means to be “rooted” in a single place. His works employ psycho-figurative bodies as mechanisms for charting space in many forms; psychogeography of the globalised world, societies or microcosms built through commonalities of practice, and the internal space of the mind. For the artist, the slouchy alter egos present throughout his work operate as sites for exploring the relationship between the material and psychological bodies. The coded visual language present throughout his practice is partnered with a unique lexicon from which he draws titles for the works and exhibitions. 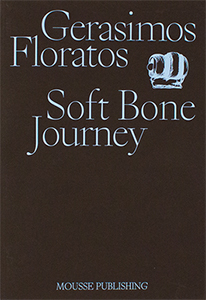 Soft Bone Journey
2018
English edition
Mousse - Mousse Publishing (books)
Catalogue documenting a recent series of works by the Greek American artist, which blends painting, sculpture, and photography. In his practice, Gerasimos Floratos plays with the idea of site-specificity, and is strongly inspired by the Situationist concept of psychogeography.