Giovanni Anselmo (born 1934 in Borgofranco d'Ivrea, Italy, lives and works in Turin) made his debut within the Arte Povera movement, embarking on research aimed at bringing out the potential presence of the invisible in the visible, exposing the close relationship that exists between the finite and the infinite. He has formulated a personal dialectic which often sees the juxtaposition of materials with opposing values; through his works the energy inherent in the materials is unleashed. Each work arises from the manifestation in space and time of the compressed and potential powers which the elements arranged by the artist produce when they encounter each other. 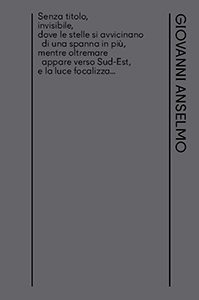 Senza titolo, invisibile, dove le stelle si avvicinano di una spanna in più, mentre oltremare appare verso Sud-Est, e la luce focalizza…
2017
bilingual edition (English / Italian)
Bruno
This publication documents a site-specific work by Giovanni Anselmo at the Carlo Scarpa space of the Querini Stampalia Foundation, in the framework of the Venice Biennale.The project takes the form of a route of trajectories and directions, weights and energies which represent five moments in which a meaning is implied: the visitors become participants. It is a work in progress because it is lived and lives through the viewer.