Joseph Mitchell (1908-1996) is an American journalist and writer, well-known for his chronicles and portraits published in The New Yorker. He is considered to be one of the pioneer of New Journalism. 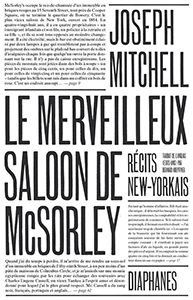 Le Merveilleux saloon de McSorley – Récits New-yorkais
2016
French edition
Diaphanes - Literature
sold out
Collection of portraits published between 1938 and 1955 in the New Yorker by one of the pioneer of New Journalism: a literary painting of a New York that no longer exists.