In the work of Jan Paul Evers (born 1982 in Cologne, where he lives and works) both preexisting and original motifs serve as the basis for black-and-white photographs made using a combination of digital and analog processes. The images have a visual effect that transcends the boundary between painting and photography, while reflecting on the reproducibility of the medium itself.

In his videos, photographs, and installations, Leon Kahane (born 1985 in Berlin, where he lives and works) addresses economic migration and the construction of territorial borders. The politics of his images takes in medial upheaval and global developments.

In her video and sculptural work, Jumana Manna (born 1987 in New Jersey, lives and works in Berlin and Jerusalem) develops narratives that can be read as “possible histories.” These histories, along with archaeological discoveries, interrogate the concept of national cultural heritage. 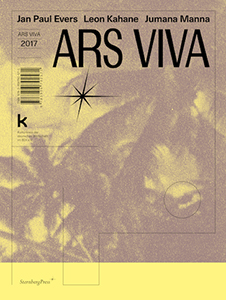 Ars viva 2017
2016
bilingual edition (English / German)
Sternberg Press - Catalogues
Catalogue of the Ars viva Prize who has been awarded annually since 1953 to young artists living in Germany whose work stands out for its innovative potential and high artistic quality. The recipients of the 2017 prize are Jan Paul Evers, Leon Kahane, and Jumana Manna.