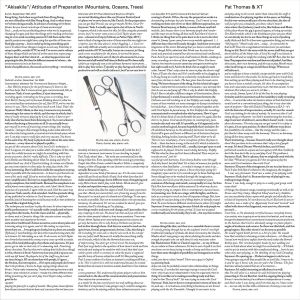 order
wishlist
A tribute to Cecil Taylor's Akisakila, re-imagined & arranged by Pat Thomas piano & XT: Paul Abbott (drums, synthetic sounds) and Seymour Wright (actual & potential saxophone).
Attitudes of Preparation (Mountains, Oceans, Trees) is a collaboration between XT (the duo of Paul Abbott and Seymour Wright) and pianist Pat Thomas. Across the two LP sides (80 minutes), and four gatefold panels (13,331 words) together they reflect on, and take inspiration from, the late pianist, composer, poet Cecil Taylor.
On 12 August 2018, as part of a Cafe OTO tribute to the recently deceased Taylor, the trio performed live a "version" of The Cecil Taylor Unit's 1973 Tokyo recording "Akisakila".
Preceding the trio performance, that evening, Val Wilmer was interviewed by Richard Williams about her long association as photographer and writer with Cecil. And, writer Evie Ward read a series of her own, Taylor's, and others' poems.
To prepare for the live performance, XT created an audio track with a set of elements (what they call "ingredients") developed in response to their listening and discussing of the 1973 trio Akisakila recording. This audio track was used loosely as a compositional framework for the performance. The ingredients included a fragment of the original 1973 concert introduction, and other sonic ingredients representing a confluence of ideas, work, invention, energies that they felt pour into and flow through Cecil's music and poetry.
In their words, they were working with, "the influence of his actual and potential influence(s). In our p(l)aying some sort of 'tribute' we hoped to create a space in which to think about, interrogate, acknowledge, embody and feel the nature of influence: his 'attitudes of preparation'. Cecil's influence on us and Pat, the nature of 'influence' in Cecil's work, and influence and tradition more broadly as a 'real and imaginary', 'actual and potential' thing. We prepared the piece, transcribing elements. And developed a series of cycles, 'unit structures' made up of various voices of Cecil's influences and associates (real and imaginary), and at the end the voice of Cecil himself."
In keeping with Taylor's complex, poetic work across sound and word, the design of this LP has been realised in collaboration with artist-typographer Will Holder (F.R.David). The sleeve which houses the discs is itself a "remembering" of Taylor's work, influences and influence (on Pat, Paul and Seymour). Just as the recording weaves through units of voices, so too does the sleeve with transcripts of interviews between: XT, Silvan Schmid and Tapiwa Svosve (Edition Gamut); Pat and Seymour; and, Cecil Taylor and Eric Plaks are woven into a reflection on influence, origins, and "attitudes of preparation".
Recorded live at Cafe OTO, August 12th, 2018.
XT is the duo of saxophone player Seymour Wright and percussionist Paul Abbott.
Pat Thomas (born 1960, lives and works in London) studied classical piano from aged 8 and started playing Jazz from the age of 16. He has since gone on to develop an utterly unique style—embracing improvisation, jazz and new music. He has played with Derek Bailey in Company Week (1990/91) and in the trio AND (with Noble)—with Tony Oxley's Quartet and Celebration Orchestra and in Duo with Lol Coxhill.
order wishlist
Graphic design: Will Holder.
published in May 2022
25.00 €
EAN : 7640172463840
in stock