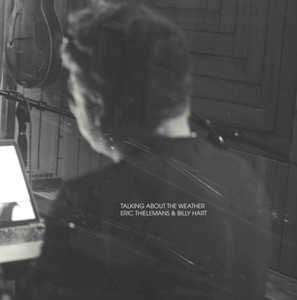 order
A dialogue of the drums.
Teacher and student. Past and present. 2 drummers. 2 men. 2 fathers. Friends. A conversation. A dialogue of the drums.
Following up on a drum/percussion duo Eric Thielemans and Billy Hart did in the Summer of 2016 at the Jazz Middelheim festival, these two drummers decided to dedicate time to continue and deepen their versatile dialogues on and around the drums.
The meeting and recording of  "Talking about the Weather " took place on January 7-9, 2018 at "Figure 8 Recording"; a beautiful, small recording studio in Brooklyn (NY). In 3 days' time both drummers circled around the situation of the studio and the conversational aspect of their personal relationship and musicianship. They did this in a way that shows how their musicianship informs and gives structure to a shared experience. As both men after a few sessions acknowledged: "We do talk as we play".
Mr. Thielemans' and Mr. Hart's story started in the Summer of 1992 when Eric Thielemans joined a masterclass with Billy Hart, organized by the Haleweyn Stiching Summer Jazz Workshop at Dworp in Belgium. This was the start of a deep human connection, friendship and mutual respect for each other's music and musicianship.
25 years in between, a gap, filled with many explorations, life experience and musical endeavors. Time to talk drum shop & Drum the Talk!
The publication comes packaged as a single LP sleeve with 7.5 mm spine and a 50 pages book inside, binded with pictures by Monica Jane Frisell and transcriptions of the talks.
Belgian drummer Eric Thielemans is one of the most idiosyncratic figures in Belgian music, someone who not only demonstrates that special musicians always seek out (and find) their own place, but above all that they always remain students of the art of questioning and listening. No musician better illustrates the difference between playing music and playing with music than percussionist Eric Thielemans. He gets to the heart of the matter with an at times extremely minimalist approach, but on the other hand he frequently relies on a range of objects beyond the regular drum kit: a drum placed on its side, a bicycle wheel with a bow, hands and the body.
William “Billy” Hart (born 1940 in Washington, D.C.) is a jazz drummer and educator who has performed with some of the most important jazz musicians in history. Early on Hart performed in Washington, D.C. with soul artists such as Otis Redding and Sam and Dave, and then later with Buck Hill and Shirley Horn, and was a sideman with the Montgomery Brothers (1961), Jimmy Smith (1964-1966), and Wes Montgomery (1966-1968). Hart moved to New York in 1968, where he recorded with McCoy Tyner, Wayne Shorter, and Joe Zawinul, and played with Eddie Harris, Pharoah Sanders, and Marian McPartland. Hart was a member of Herbie Hancock's sextet (1969-1973), and played with McCoy Tyner (1973-1974), Stan Getz (1974-1977), and Quest (1980s), in addition to extensive freelance playing (including recording with Miles Davis on 1972's On the Corner).
order
published in May 2019
180 gr LP + 52 page book
38.00 €
ISBN : 978-9-49052-141-7
EAN : 9789490521417
in stock