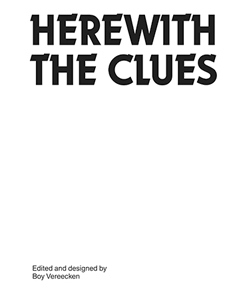 order
Herewith the Clues continues Boy Vereecken's research into mass-market literary culture, which began with Signature Strengths (2016). The volume includes two text contributions: a contemporary take on the whodunit novel by Shumon Basar, followed by a tour of the history of the Crime Dossiers genre by Laura Herman. The book is illustrated with a photo series from Antoine Begon, who has unpacked and photographed the pieces of evidence that comprise Crime Dossiers such as File on Rufus Ray and Murder Off Miami.
“An intricate web of envy, desire and aspiration.” Herewith the Clues is a jaunt through the history of the Crime Dossiers, a form of literature as mystery game—developed in the interwar period—where players solved puzzles much in the way that a detective in the 1920s might have solved a crime using forensics. With origins in the whodunit mystery genre (whose roots go as far back as a tale in One Thousand and One Nights), this style of parlor game proliferated. The mass-produced games came in the form of binders, books, suitcases, or boxes containing crime-scene evidence (and literary red herrings), each piece of evidence itself a kind of riddle. One could see these as not only an entirely new manifestation of gamified literature, but game playing itself evolving: storytelling as a riddle-solving game acted in the flesh, rather than existing solely in the minds of author and reader.
order
Edited by Boy Vereecken.
Contributions by Shumon Basar, Antoine Begon, Laura Herman.