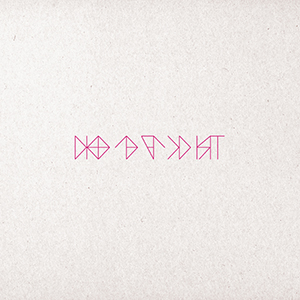 order
wishlist
Special one-sided recording with a visible spiral loop on Side B by turntable-music performer Dieb 13.
After extensive touring and releasing CDs among others with Phil Minton, Mats Gustafsson and John Butcher Group, Dieb 13's new solo output Trick17 is an enjoyment for both the ear and the eye. Side A (“audible”) is a 25 minute solo piece that he developed in a Ping Pong method between vinyl cutting machine and record turntable. It's the drivation of its own and has the classical form of the first movement of a 19th Century symphony. Strongly dynamic structured and full of surprises. A classical kind of turntable music. The B-Side (“visible”) whereas, sounds like noise, periodically cut into pieces. Its repetitive psychedelic spiral character contrasts with the classical structured A-Side and with continous listening one can fall into a trance-like state of mind. But only upon closer look the B-Side artwork reveals the reason for its name. What is audible, is also visible here, and vice versa. The image, reproduced on the surface of side B is the result of an artwork for which Dieb13 has not just written the music but programmed also the software.
Limited edition of 300 copies.
Dieb 13 (Dieter Kovačič, born 1973 in Vienna) is an Austrian experimental musician. Since the late 1980s, he has been one of the european key figures in the harnessing of tape players, vinyls, CDs, hard disks and IP protocols as instruments.
order wishlist
Recorded, edited & mixed in February-March 2013.
Mastered by Kassian Troyer.
Artwork by Wendelin Büchler. 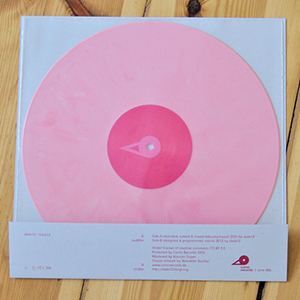 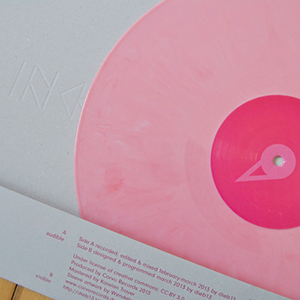