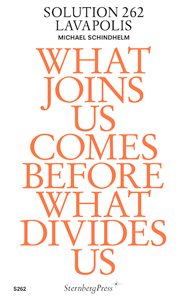 Seventy years ago, the small island nation of Lavapolis was founded. It began as an alternative, a gambling destination to rival Las Vegas, and became a model for a new way of living. With its principle of universal solidarity, the nation counters the pitfalls of contemporary global society. It is an ever-shifting utopia; a volcano jutting out of the Mediterranean Sea; an extension of the open frontier. The biographies of its inhabitants are integral to the whole. If the world backs down from the challenges of Lavapolis, the island is destined to erupt.
Solution 262: Lavapolis accompanies “Friday in Venice,” a transmedia storytelling project about a possible Europe that took place at the 14th Venice Architecture Biennale, August 1–17, 2014 (www.lavapolis.com).
Michael Schindhelm (born 1960 in Eisenach, Thuringia) is a German writer and theater director.
order wishlist
Graphic design by Zak Group.
published in December 2014
English edition
11,2 x 17,8 cm (softcover)
192 pages
15.00 €
ISBN : 978-3-95679-070-6
EAN : 9783956790706
in stock