For over forty years, with his sound poetry revue OU (1964-1974), then through his participation in various international sound poetry festivals, through his personal experience in the experimental studios of radio stations in Köln, Paris, Australia, Canada or Sweden and in his concert/performances throughout Europe, Henri Chopin (1922-2008) has consistently and unceasingly opened the ways to unexplored spaces beyond all known languages. Thanks to the systematic use of microphones, amplifiers, tape recorders, editing and mixing consoles, he has given a voice to realms beyond modern or experimental music, beyond any note system and headed for spaces without norms, categories, definitions or limits: spaces of permanent metamorphosis.
But despite misleading appearances, Henri Chopin is not merely doing a new kind of music; he is not just a consequence of Pierre Schaeffer's concrete music principles and Pierre Henry's experiments in the fifties. Henri Chopin is an individual (in Stirner's sense: the ego and its own) who has always resisted absurd attempts to reduce him to part of a movement, a school, an academism; what one perceives are Henry Chopin's bio-psychical vibrations, that he himself constructed by electronically recording, then modifying, amplifying and transforming the energies of his own body. This language is beyond institutionalised language or indeed beyond any language, it precedes all idioms (sound signs, playful energy signs like those of whales and dolphins), it is a breath language, a soul language (the language of anima), the unfettered respiration of the cosmic energies we are, who belong neither to factions nor clans. The energy of live beings, whose individuality is irreducible, and impossible to break down. Solitary and strange cosmic creatures, mysterious yet showing solidarity, resonating with all those who dared breach shackles and rules, escape vile obedience, submission and compromise, reject complacency and blind allegiance to traditional or experimental academism. With Henri Chopin let go and bid farewell to all that: here's a plunge into the unknown, an exploration of the inside of voice, of the other side of voice, a sort of submarine navigation, of potholing into the unmapped tunnels and grottoes of the glottis, oesophagus, stomach and lungs, the places where pneuma (breath) is formed.
Henri Chopin uses electronic devices to explore the pneumatic body relentlessly, but never gives way to the temptation of artificially fiddling with noises. He remains a-live, energetic vibration of the pulsating, cosmic soul.
Michel Giroud 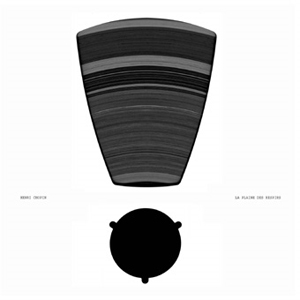