Alex Hamburger was born in Belgrade, Serbia, in 1948. He was six years old when his family emigrated to Brazil in 1954. He received a degree in Economy from the Faculty of São José do Rio Preto, São Paulo, moving to Rio de Janeiro in 1973 where he became attracted to the areas of literature and the visual arts. In 1975, in order to open up new horizons he travelled to Europe, living in Paris for six months and in London for one and a half years, which allowed him to deepen and expand his knowledge in his main areas of interest. From the 80s onward his researches and proposals turned to the possibilities of fusion and intertwining of languages, developing works in Verbal, Visual and Sound Poetry, Object-Poem, Artist's books, Installation, Performance art, etc. During that period and along subsequent decades, he realized and participated in various groups and one man shows, both in Brazil and abroad. He has published seven books in various poetical genres, three CDs of Sound Poetry and has performed several performance pieces, some in partnership with the visual artist Marcia X, with whom he established a fruitful relationship throughout the 80s, contributing decisively for a better understanding and acceptance of the above practices in the local art circuit of Rio de Janeiro. His work is held in the collections of contemporary art institutions, in Brazil and abroad, including The Museum of Modern Art, RJ, The Museum of Modern Art, SP, Printed Matter Bookstore, New York, Compendium of Contemporary Fine Prints, Hamburg, ICA, London among others. Alex Hamburger continues to live and work in Rio de Janeiro, Brazil. 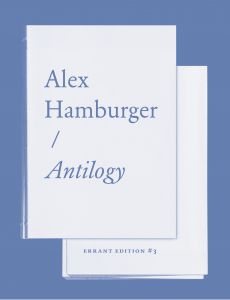