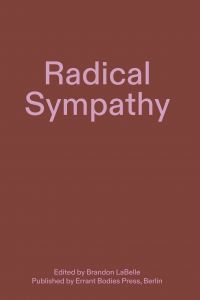 wishlist
A collective reflection on the notions of sympathy and care in the context of the environmental and epidemiological crisis.
Questions of interdependency and care have gained broader urgency within today's planetary environment. From the pressing need to work at post-carbon futures to the challenges surrounding our covid-19 realities, understandings of care-work and co-existence require ever-greater imagination and creative engagement. As cultural communities reorient their practices and educational institutions test out other methods in the context of the pandemic, a new sense for solidarity and critical hope are gaining traction. This includes ways of attending to the politics of care, the systems of neoliberal extraction and their toxic projects, and the uneven power relations through which solidarity must work.
The publication, Radical Sympathy, gathers a diversity of voices and perspectives with the aim of capturing methods and expressions of care and communal effort, as well as theoretical reflections on sympathy as a position of caring-for. While sympathy may carry connotations of charity, as that which acts from a distance, the publication underscores sympathy as what also enables forms of action and imagination. As Stephen Darwall argues, sympathy is a feeling or emotion that responds to an apparent threat or obstacle to another's well-being. In contrast to empathy, as feeling what others feel, sympathy is responsive and the basis for action. Jane Bennett further argues in Influx and Efflux how sympathy may move from personal compassion to impersonal force, from scenes of familiarity and proximity to broader relations and recognition. Sympathy, for Bennett, is understood as "currents" that exist in and outside of bodies, that flow as affective and resonant forces, and that figure across human and more-than-human, bodily and technical worlds. It is by way of sympathy that interconnectivity and interdependency are felt as well as made categorical, articulating a position of concern and collaboration especially beyond one's immediate relational circles.From interpersonal care to rhythms of collaboration and resistance, the publication offers reflections on how personal compassion and impersonal force can be deployed, lending to a disposition of solidarity and the crafting of unlikely companionships.
Anastasia A Khodyreva is a Gender Studies researcher at the University of Turku, a writer and an organizer. Their practice is infused by feminist new materialisms. They strive to breathe, walk, and sense towards more liveable worldings for marginalized beings. Communal reading, haptic encounters, sound walks, attunements and multisensorial writing are their companion methodologies.

Katva-Kaisa Kontturi is Senior Lecturer in Art History at the University of Turku and Honorary Fellow at the Victorian College of the Arts, The University of Melbourne. Her work engages with material-relational philosophies of the body and art, new materialist research practices, contemporary art-making and activism.

Brandon LaBelle is an artist, writer and theorist working with sound culture, voice, and questions of agency. He develops and presents artistic projects and performances within a range of international contexts, often working collaboratively and in public.

Achille Mbembe is a philosopher, political scientist, and public intellectual. He obtained his doctoral degree at the Université Paris 1 (Panthéon-Sorbonne) in 1989 and subsequently obtained the D.E.A. in Political Science at the Institut d'études politiques, Paris. Mbembe is a Research Professor of History and Politics at the Wits Institute for Social and Economic Research in Johannesburg, South Africa and a Visiting Professor in the Department of Romance Studies at the Franklin Humanities Institute, Duke University. His books include On the Postcolony (2001), Critique of Black Reason (2017), Necropolitics (2019) and Out of the Dark: Essays on Decolonization (2021).

Margarida Mendes is an hydrosonic researcher, curator and ecologist. She creates transdisciplinary forums, exhibitions and experiential works where alternative modes of education and sensing practices may catalyse political imagination and restorative action. She has been long involved in anti-extraction activism and ecopedagogy, collaborating with marine NGOs, Universities and institutions of the art world.

Lilia Mestre is a performing artist, dramaturge and researcher living and working in Brussels. She works with scores, inter-subjective set-ups and other chance-induced processes as emancipatory artistic and pedagogical tools, which have been documented in various publications. She is interested in forms of organisation created by and for artistic practice as alternative study processes for social political reflection. She is the artistic coordinator of a.pass (advanced performance and scenography studies) since 2017.

Cecilie Sachs Olsen is a research fellow at the Norwegian Institute of Urban and Regional Research at Oslo Metropolitan University. Her work revolves around developing creative methods for urban research and exploring how artistic practice can be used as a framework to analyse and re-imagine urban space and politics.

Valeria Graziano is a research fellow at the Centre for Advanced Studies, University of Rijeka. Her research and practice focus on the refusal of work, a creative redistribution of the labour of social reproduction and the politicization of pleasure.
Marcell Mars is one of the founders of Multimedia Institute/MAMA in Zagreb. Together with Tomislav Medak he founded Memory of the World/Public Library, for which he develops and maintains software infrastructure.
Tomislav Medak is a doctoral student at the Centre for Postdigital Cultures. He is a member of the theory and publishing team of the Multimedia Institute/MAMA in Zagreb, as well as an amateur librarian for the Memory of the World/Public Library project.
All three authors are convenors of Pirate Care, a translocal research process focusing on collective learning and disobedient responses to the current care crisis.