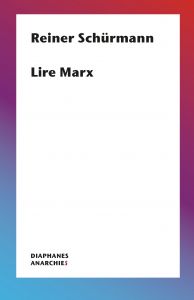 pre-order
wishlist
Schürmann's lecture on Marx emphasizes the philosophical axis of the German theoretician's work and reads it as a transcendental materialism.
Also available in English edition.
Reiner Schürmann (1941–1993) was a German philosopher. He was born in Amsterdam and lived in Germany, Israel, and France before immigrating to the United States in the 1970s, where he was professor and director of the Department of Philosophy at the New School for Social Research in New York. He is the author of three books on philosophy: Heidegger on Being and Acting, Wandering Joy, and Broken Hegemonies. Origins is his only work of fiction. He never wrote nor published in his native German.
pre-order wishlist
Translated by Mehdi Belhaj Kacem.
2022 (publication expected by 1st quarter)
French edition
13,5 x 21 cm (softcover)
160 pages
18.00 €
ISBN : 978-2-88928-059-9
EAN : 9782889280599
forthcoming