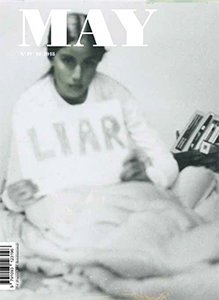 Trisha Erin / Freestyle Rap / “A Perfect Day” / by Cecilia Pavón / on the legitimate acquisition of tons of sex / the onset of automation / on the fim The Square;“Seismography of Struggles” / at INHA, Paris / Sam Pulitzer at Francesca Pia / Richard Maxwell at Greene Naftali / Clément Rodzielski on Edvard Munch at MET Breuer / Georgia Sagri at Kunstverein Braunschweig, Karl Holmqvist on Versace Retrospective at Kronprinzenpalais.
Conceived as a collective space in which to develop thoughts and confront positions on artistic production, May magazine examines, twice a year, contemporary art practice and theory in direct engagement with the issues, contexts and strategies that construct these two fields. An approach that could be summed up as critique at work – or as critique actively performed in text and art forms alike.
Featuring essays, interviews, art works and reviews by artists, writers and diverse practitioners of the arts, the magazine also intends to address the economy of the production of knowledge – the starting point of this reflection being the space of indistinction between information and advertisment typical of our time. This implies a dialogue with forms of critique produced in other fields.
published in 2019
bilingual edition (English / French)
17,5 x 24 cm (softcover)
256 pages (b/w ill.)
ISBN : 979-1-09312-319-6
EAN : 9791093123196
out of stock
table of contents