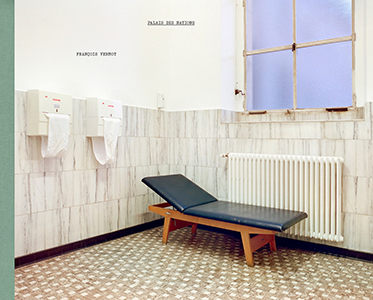 order
This monograph is a photographic record of the interiors of the Palais des Nations in Geneva, before its renovation. The work of François Vermot is the last visual testimony of this labyrinthine building with authoritarian architecture. Built in the 1930s, the Palace was the headquarters of the League of Nations, and then became the European center of the United Nations.
François Vermot, born in 1987 in the canton of Neuchâtel, now an adopted citizen of Fribourg, has had the excellent idea of making a permanent pictorial record of the interiors of the Palais des Nations (Palace of Nations) before it is modernized, work scheduled to be carried out over the next five years. It will be the largest renovation site in Europe, and the work will be in progress from March 2017 to the summer of 2023.
François Vermot's photographs celebrate the Palais des Nations as a huge labyrinth consisting of passages and pathways, galleries and corridors. Inevitably, we think of Albert Cohen's novel Belle de Seigneur (set in the League of Nations in the 1930s), and expect at any moment to spot its hero Adrien Deume, anxious to cross the path of a superior on the way to the toilet who might feel like exchanging a few words with him, which might subsequently enable him to climb up the promotion ladder at the League of Nations. We pass by an infinite number of closed wooden office doors behind which we can imagine the “plotters” sharpening their pencils on cast-iron Caran d'Ache pencil sharpeners.
Joerg Bader
Published following the group exhibition “Ça c'est Genève ! THIS IS GVA!” at Centre de la photographie Genève, from February 28 to May 13, 2018.
Self-taught cinematographer and photographer, François Vermot (born 1987 in Neuchâtel, lives and works in Fribourg) captured his first images at the age of 12 with the family camcorder. While studying geography at the University of Fribourg, he produced his first documentaries—portraits with a particular sensitivity to the places where the people he filmed used to live. In parallel, he developed a passion for photography and light, observing what happens when nothing is happening. He regularly leaves his everyday life for a month or more, voluntarily losing himself in a new town, recreating his life for a time, somewhere different. In this way he has developed works that pay homage to the ordinariness of a place, to the banality of reality.
order
Texts by Joerg Bader, Michael Møller, Sami Kanaan.