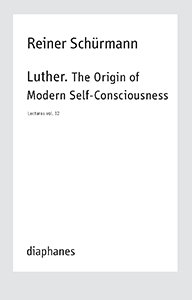 pre-order
wishlist
First of 29 volumes of Reiner Schürmann's so far unpublished lecture notes on the history of western thought, this publication traces the rise of self-consciousness in its modern form and function, with Luther as the central figure of Schürmann's study.
What has been the specifically modern function of self-consciousness? Why speak of rise or origin? It would obviously be absurd to claim that before Luther, Descartes or Kant, people had no self-consciousness. Yet in pre-modern cultures self-consciousness has not fulfilled the systematic role that it has come to play since then. In this lecture Schürmann traces its rise of in its modern form and function, i.e. as the subjective reference point before which every object must appear to qualify as a phenomenon. As opposed to earlier conceptions, self-consciousness in its modern version rules over its contents, it imposes a regime on being. This transcendental turn is studied in Luther whose Copernican reversal in the way of thinking is less well known than the foundational character of both the Cartesian “cogito” and Kantian “apperception.”
First of 29 volumes of Reiner Schürmann's so far unpublished lecture notes. Starting with Parmenides (Vol. 1) up to Contemporary French Philosophy (Vol. 29), Schürmann offers a unique reading of the history of western thought and action as a series of eras governed by the rise and fall of certain dominating concepts that contained the seeds of their own destruction.
Reiner Schürmann (1941–1993) was a German philosopher. He was born in Amsterdam and lived in Germany, Israel, and France before immigrating to the United States in the 1970s, where he was professor and director of the Department of Philosophy at the New School for Social Research in New York. He is the author of three books on philosophy: Heidegger on Being and Acting, Wandering Joy, and Broken Hegemonies. Origins is his only work of fiction. He never wrote nor published in his native German.
pre-order wishlist
2023 (publication expected by 2nd quarter)
English edition
13,5 x 21 cm (softcover)
224 pages
39.95 €
ISBN : 978-3-0358-0016-6
EAN : 9783035800166
forthcoming