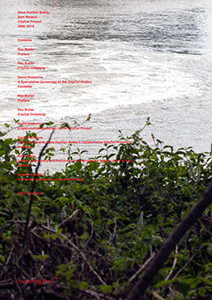 order
This publication traces the extraordinary collaboration between American artist Dave Hullfish Bailey and senior Aboriginal writer and activist Sam Watson. structured around their highly political work Maiwar Performance, this book also covers their activities both before and throughout their work together.
CityCat Project 2006–2016 is the record of an extraordinary collaboration between American artist Dave Hullfish Bailey and senior Aboriginal writer and activist Sam Watson. The collaboration is structured around Maiwar Performance, in which the CityCat ferries that ply the Brisbane River (Maiwar) execute unannounced maneuvers near a site of significance to the Aboriginal people who lived on the lands around Brisbane before British colonization in the early nineteenth century.
After its first iteration in 2006, Watson designated the event a “Dreaming,” which meant that it should be periodically repeated. The performance has since been restaged in 2009, 2012, and 2016, with Watson seeing it as an important act of Indigenous empowerment: a way of restoring agency to the local Aboriginal people in bringing their past alive and allowing them to think that the future has not been definitively determined.
Parallel to this recurring event is an evolving body of works in diverse media. At its core is Bailey's lateral research-based process, which combines a highly reflexive approach to language with granular descriptions of material and cultural systems. The call-and-response collaboration between Watson and Bailey and the many irreducibilities within it, generates an articulation of place that is playfully extrapolative, yet politically and intellectually resistant.
This publication includes an introduction by its editor, Rex Butler, and an essay and detailed timeline by CityCat Project curator, David Pestorius, which covers the activities of Bailey and Watson both before and throughout their work together. In addition, art historian Sally Butler reflects upon Watson's literary production, while curator Michele Helmrich sheds light on the local historical context that significantly informs the collaboration.
Published on the occasion of the eponymous exhibition at Neon Park, Melbourne, from March 15 to April 8, 2017.
In Dave Hullfish Bailey's complex installations he incorporates everything from photography, film, words, sand, grass and grain to drawings and ready-made objects. A turning point in his practice is architecture, especially modernist architecture, and alternative ways of using and creating utopian living structures. In his works Bailey often poses questions about the relation between natural and societal structures. Language and histories are emancipated and new potential social realignments are suggested. Narratives are joined together, expanded and condensed through non-linear systems, diagrams, complex webs, patterns and trains of chain reactions, reflecting the way in which it is impossible to form a singular or fixed viewpoint when social, political and cultural spheres, as well as language, facts and fictions are so inextricably connected.

Sam Watson is an Aboriginal writer and activist, author of two novels, including the highly acclaimed The Kadaitcha Sung (1990). Other major work includes his 1996 short film Black Man Down.