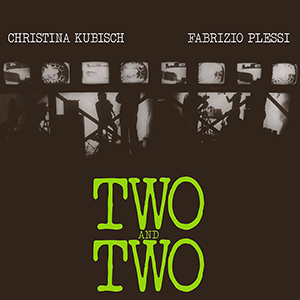 order
This recording brings together two pioneers in their respective fields, sound artist Christina Kubisch and video artist Fabrizio Plessi. Two and two is the outcome of a Fluxus-oriented multimedia performance inspired by the natural elements.
Two and two is the outcome of the ambitious research developed by Christina Kubisch and Fabrizio Plessi in 1976, a collaborative effort towards the merging of visual and sound elements into a new form of intermedia. Influenced by the aesthetics of Fluxus, the duo produced a highly complex and articulated performance, involving two camera operators and several video screens, as well as a variety of objects and unconventional instruments. The results is structured into four parts inspired by the natural elements, in which single instruments loose their different sonic characteristics to become inseparable parts of a unique visual/acoustic process.
Christina Kubisch (born 1948 in Bremen, lives and works in Hoppegarten, Germany) studied painting, music and electronics in Hamburg, Graz, Zürich and Milano, where she graduated. Performances, concerts and works with video in the seventies, subsequently sound installations, sound sculptures and work with ultraviolet light. Her compositions are mostly electroacoustic, but she has written for ensembles as well. Since 2003 she works again as a perfomer and collaborates with various musicians and dancers.
Christina Kubisch has been a visiting professor in Maastricht, Paris and Berlin. She has been a professor for sound art at the Academy of Fine Arts, Saarbrücken, Germany, from 1994 to 2013. She is a member of the Akademie der Künste Berlin since 1997.
Fabrizio Plessi (born 1940 in Reggio Emilia, lives and works in Venice) studied at the Accademia di Belle Arti in Venice, where he subsequently held a professorship in painting. One of Europe's most influential video artists, he also works in film, performances, sculpture and installations. An early pioneer of video art, Plessi is one of the first artists to experiment with the medium in Italy. Trained as a painter, he began adding moving images to his work in the 1960s. As early as 1968, his multidisciplinary practice concentrated on the natural elements with water in particular becoming the main theme of his works. Plessi was drawn to the element for its primordial and mystical associations. Since the 1980s, Plessi began to meditate on the relationship between art and technology and our relationship with the environment both built and natural. He began integrating his images of elemental forces like water, fire and lava in large-scale “terrestial” constructions of stone and wood. By capturing the elements and juxtaposing them with the built environment, he questions our ideas about history, memory, and landscapes. In 1987, Plessi achieved worldwide recognition when his iconic work Roma was exhibited at Documenta 8 in Kassel, Germany. Staged as a monument of ancient Rome, Roma was an installation combining stone ruins and 36 embedded video screens on a conveyer belt. He has since created numerous site-specific installations, often tending towards the large-scale and Baroque, and has exhibited in major galleries and institutions internationally, including multiple participations in the Venice Biennale. In November 2013, the Plessi Museum, dedicated exclusively to his work, opened at the Brenner Pass, the former customs area between Italy and Austria. In 2014, Plessi was the recipient of the prestigious Premio Pascali award.
order
published in January 2017
180grm vinyl
4 tracks (9'44 / 10'31 / 11'16 / 11'36)
29.00 €
in stock