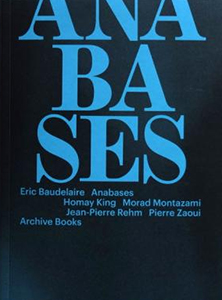 order
wishlist
This book documents an installation by Eric Baudelaire revisiting the political and personal saga of the Japanese Red Army as an anabasys—an allegory of a journey that is both a wandering into the unknown and a return back home.
“This book is not for reading but for wandering. Its lines do not roll out continuously but superimpose each other to infinity, creating not a compendium of knowledge but a web of prescience. It does not follow a logical framework but unfurls a grid with multiple entries. It does not assert a set subject or conclusive postulate. At most it invites us to probe the recesses of a mind in motion, and steeps us in the driving material that brings it to life. It reflects the works it exhibits, the documents it discloses and the commentary it generates: it aspires to ubiquity. Anabasis, the very real linking thread that stitches it together, serves not just as an archaeological enigma, but also as an allegorical force. The main author of this ocean crossing, Eric Baudelaire, is both a collector of vestiges and a sketcher of wandering lines who has surrounded himself with other meticulous voices (Pierre Zaoui, Homay King, Jean-Pierre Rehm), fellow-travellers in this library secret. Readers will be able to enjoy the gradual unfolding of the story of war and politics whose underlying intellectual and poetic adventure this book enables us to recall—that of its repetitions, ramifications and hybridisations: the story of Anabasis after Anabasis (or from Xenophon's Anabasis to that of Paul Celan by way of Alain Badiou's), from an ancient narrative to its modern reappropriation.”
Morad Montazami
Published following the exhibitions “The Anabasis of May and Fusako Shigenobu, Masao Adachi and 27 years without images” at la Synagogue de Delme, and Gasworks, London, in 2011 and 2012.
Working in photography, video, print making and installation, Eric Baudelaire (born 1973 in Salt-Lake City, USA, lives and works in Paris) is interested in the relationship between images and events, documents and narratives. Recalling factographic practices, his work can involve elaborate staged situations that appear to be real, but are somewhat off-kilter, and place the viewer in a situation of questioning the modes of production and consumption of images. He also uses simple techniques of assemblage, sampling and mechanical reproduction, applied to real documents, to playfully extract fictive narratives or new formal vocabularies.
order wishlist
Edited by Eric Baudelaire and Anna Colin.
Texts by Morad Montazami, Pierre Zaoui, Homay King, Jean-Pierre Rehm.