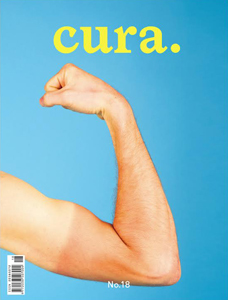 order
Essays and conversations about the practice of exhibition making; conversations, texts, labs, projects and contributions by about twenty international artists, curators and critics.
Cura. 18 is out now with an awesome cover by Camille Henrot, literally “flexing her muscles” while working head to head with the curator Ruba Katrib, author of the introduction to her work.
Curatorial Studies: Lorenzo Benedetti is present with his long-awaited turning point in his anthology collection of international figures, who helped shape the milestones in the history of the twenty-first century, with a portrait of the Swiss curator Harald Szeemann. With his column, Vincent Honoré, continues instead his journey to Mexico City, where he meets the curator of the Museum Experimental El Eco Mauricio Marcin, who has been active with a program of research and experimentation since the fifties. Jean-Max Colard tackles a new theme in the history of exhibition formats, focusing on the role of the viewer, the public, the fruition of the exhibition. The “Show and Tell” segment by Cecilia Canziani is compared with three works by Falke Pisano, offering, thanks to the dialogue between text and images, a fresh gaze into the artist's work. Through the historical work of Christina Ramberg, the curator Anna Gritz introduces a few interventions that artists have carried out in the pages of Playboy since the sixties, fielding the social changes associated with the perception of the role of women and feminist activism.
Artists' Spotlights: Alex Da Corte intervenes on the pages of the magazine with a layout designed in collaboration with Matthew Owen in which he interacts with the curator Kim Nguyen, telling of his relationship with cinematic imagery, space, masks, and some sort of political determinism of his collecting found objects. Interviewed by Adam Carr, Jordan Wolfson speaks of the new findings of his production and a circular path that has led him, almost ten years later, to reunite with the original reasons behind his work. The Chief Curator of ICA in Miami Alex Gartenfeld analyzes the origins of the work of the American artist Takeshi Murata, his relationship with image, design, architecture and scenic fiction. Among the project interventions on the pages of the magazine, there are Claudia Wieser's wallpapers, Oliver Laric's digital columns, and Zak Kitnick's objects, with written pieces by Mark Emblem and Clément Delépine.
Cura.magazine is a platform for contemporary art based in Rome that investigates with an independent spirit today's artistic production, art's emerging scene and the borders that have marked its central moments, through collaborations with international artists and curators, who live in different areas of the world. It has a production of three issues per year.
The platform is also an editorial structure (Cura.books), publishing a series of artist's books (see the corresponding page in the publishers section).
order
published in October 2014
English edition
20,5 x 28,5 cm (softcover)
160 pages (color ill.)
7.00 €
in stock
table of contents