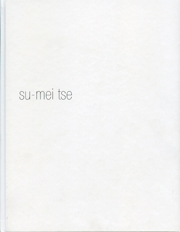 order
First monograph.
Following a debut that attracted considerable attention in her home area and some early experiences on the international scene, the 2003 Venice Biennial established Su-mei Tse's reputation and enabled her to pursue her research and show her work in numerous exhibitions worldwide. This publication documents her exhibitions at The Renaissance Society at the University of Chicago and at Casino Luxembourg.
The Ich-Manifestation, 2005, at The Renaissance Society, featured multiple projections of loudly plodding giant tortoises. This work, which holds a special place in the artist's oeuvre, is subjected to an in-depth analysis by Jens Hauser in his essay.
Tse's 2006 exhibition at Casino Luxembourg included numerous works, both old and new, and gave a fuller view of her personal vision of East and West, and memory and the present, along with representations of nature and social and cultural conditioning, accompanied by music or an equally resounding silence. Raymond Delambre focuses in his text on the poetic relations between the works, while Jim Drobnick dwells more particularly on the notion of sonority in Tse's practice.
Born 1973, Su-Mei Tse lives and works in Luxemburg.
order
Texts by Raymond Delambre, Jim Drobnick, Jens Hauser, Su-Mei Tse.
published in 2006
bilingual edition (English / French)
19 x 24,5 cm (hardcover)
208 pages (color ill.)
25.00 12.50 €
(special offer)
ISBN : 978-2-919893-61-4
EAN : 9782919893614
in stock