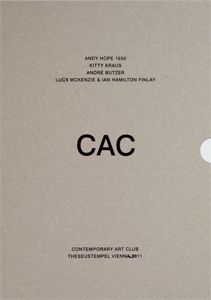 order
Catalogue (made of various booklets and posters) of the exhibition series at the Theseus Temple in Vienna.
In 2011, the Contemporary Art Club (CAC, founded in Vienna in 2008), in a cooperation with the Kunsthistorisches Museum Wien (KHM, Museum of Fine Arts Vienna), organised an exhibition series at the Theseus Temple, a classicist building constructed at the beginning of the 19th century in Vienna's Volksgarten, at the time with the sole objective of showing one sculpture: Antonio Canova's Theseus Fighting the Centaur. The sculpture was relocated to the KHM at the end of the 19th century and the temple has been used for different purposes since then, however, never again in such an exposed way for contemporary art as during Canova's times.
The project was launched on 3 September 2011 with an exhibition by Andy Hope 1930, followed by Kitty Kraus in October and André Butzer in November. The series concluded with a dialogue between Lucy McKenzie and Ian Hamilton Finley in December. A complex and diverse group of young contemporary artists had thus, during a relatively short span of time, dealt with the exceptional artistic space in the centre of the old part of Vienna. This publication aims at documenting this experiment.
Accordingly, also the concept to this exhibition series, the basis for the discussion initiated by CAC with the participants is published.
order
Texts by Michael Bracewell, Roberto Ohrt, Magnus Schäfer.
published in August 2013
English edition
21 x 29,7 (box set)
104 pages (10 elements, color & b/w ill.)
26.00 €
ISBN : 978-3-943514-12-4
EAN : 9783943514124
in stock 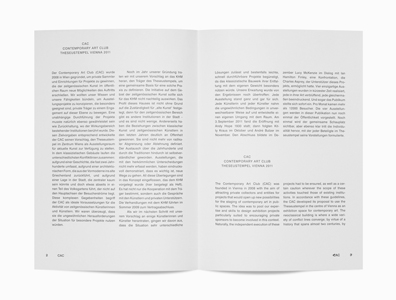 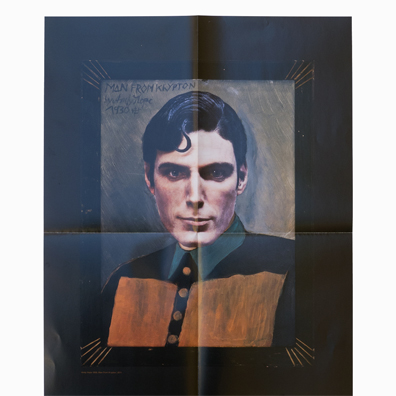