Working at Copan / Trabalhando no Copan 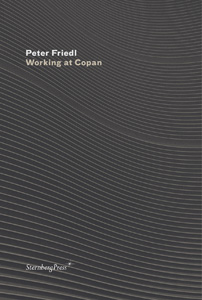 order
Working at Copan collects interviews with workers and employees at Edifício Copan, a landmark modernist architecture in the center of São Paulo. Designed by Oscar Niemeyer and completed in 1966, it became the largest residential building in Latin America. As a historical building and symbol of “vertical utopia,” it embodies an era of radical political and economic changes within Brazilian society.

In his new book project, Berlin-based artist Peter Friedl deals with the work left over from the modern era. The questions and answers are concerned with the logic of the labor performed, the work process, the relationship of work and leisure, biographical details, memories, and plans for the future.
The book is followed by an exhibition at the Kunsthalle Basel from January 18 – March 30, 2008, and at Extra City, Antwerpen from April 10 – June 8, 2008.
Ever since Peter Friedl (born 1960 in Oberneukirchen, Austria, lives and works in Berlin and New York) first entered the international contemporary art scene in the early 1990s, his artistic practice has continually challenged the art world. As “conceptual acts,” his works take on the role of models: as exemplary articulations and solutions of aesthetic problems involving political and historical consciousness. With them, Friedl continues to transgress the borders of art, a process begun by the Conceptual Art of the 1960s, opening contemporary art to its social, economic, and institutional conditions. “Overcoming the dictate of visibility, without using text as a substitute,” is how Friedl outlines his artistic program.
Friedl has participated in Documenta X and XII (1997, 2007); the 48th Venice Biennale (1999); the 3rd Berlin Biennial for Contemporary Art (2004); the 2nd International Biennial of Contemporary Art, Seville (2006); Manifesta 7, Trento (2008); the 7th Gwangju Biennale (2008); the 28th Bienal de São Paulo (2008), and the Tirana International Contemporary Art Biennial (2009). His solo exhibitions include “Blow Job” at Extra City Kunsthal Antwerpen (2008); “Working” at Kunsthalle Basel (2008); the retrospective survey “Work 1964–2006” at Museu d'Art Contemporani de Barcelona, Miami Art Central, and Musée d'Art Contemporain, Marseille (2006–07); and “Out of the Shadows” at Witte de With, Center for Contemporary Art, Rotterdam (2004).
order
published in 2008
bilingual edition (English / Portuguese)
14 x 21 cm (softcover)
256 pages (8 b/w ill.)
19.00 €
ISBN : 978-1-933128-37-5
EAN : 9781933128375
in stock

Working at Copan / Trabalhando no Copan