Stevie Guy was born in Preston, UK in 1981 and left in 2000 to study Acting at the University of Manchester. After scoring some bit parts in sitcoms and dramas she joined pop/punk band, Y'r Impossible. The band lasted a tumultuous and successful five years. In 2009 she single handedly took over what had until then been The Woodward's three piece harmony section. In 2014 Stevie moved to Amsterdam to be a full time Woodward. She currently manages Peter Schuyff 's studio. 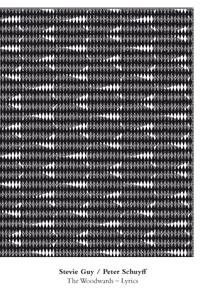 Stevie Guy, Peter Schuyff
The Woodwards – Lyrics
2018
English edition
Les presses du réel – Artists' Writings – Eccentricities
Known for his extravagant neo-surrealist paintings, the Dutchman emigrated to New York Peter Schuyff is also a guitarist and singer. Illustrated with drawings by Eliane Gerrits, this book brings together the lyrics of the folk and psychedelic songs of the band The Woodwards, which he forms with the English singer Stevie Guy.