François Ristori (1936-2015), nearly unknown for the general public, yet belongs to a generation of artists who, in the 1960s, led radical studies, questioning painting. At the beginning of these years, François Ristori produced a gestural oil painting qualified by himself as "post-automatic". Quickly, large spots covering the entire surface of the canvas appear in his research. At the end of 1967, he sets up a rigorous work which he applied throughout his career. His practice, near of BMTP (Buren, Mosset, Toroni, Parmentier) proposals, is characterized by a distancing of subjectivity and the establishment of a protocol. Thus, his hexagonal pattern is transformed according to precise rules to become interlocked tracks-shapes, all slightly differents. The colors link together, blue, red, white, in an order chosen by the artist and varying depending on the artwork. This work without any effect or affect, almost mechanical, puts the eyes to the test. 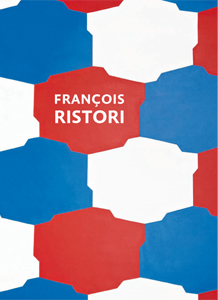