Alex Martinis Roe (born 1982 in Melbourne, lives and works in Berlin) is an artist and researcher. She is a former fellow of the Graduate School at the University of the Arts Berlin, and holds a PhD from Monash University, Australia. She is Head of Sculpture at the Australian National University and co-leads the transdisciplinary working group FORMATIONS with philosopher Melanie Sehgal, which began within the framework of the Haus der Kulturen der Welt in Berlin in 2015. 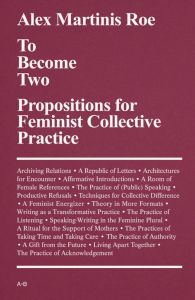 To Become Two – Propositions for Feminist Collective Practice
2018
English edition
Archive Books
This publication offers a narrative of artist Alex Martinis Roe's research into a genealogy of feminist political practices in Europe and Australia from the seventies until today.